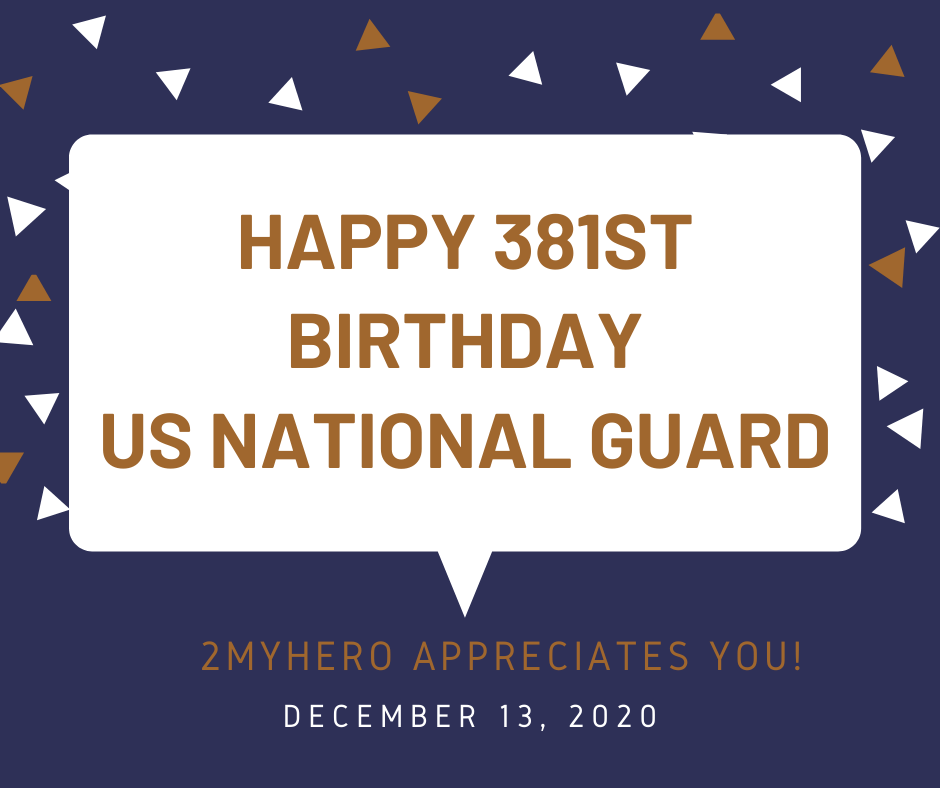 Today, December 13th 2MyHero wants to recognize the birthday of the National Guard. This year (2020) is their 381st Birthday!

According to NationalDay, the first militias formed date back to 1607. Just shy of 30 years later (1636) small local units of militia merged into one which created the first colony-wide militia which set the stage for a truly “National” Guard.

When the National Guard’s oldest regiments met for their first drill on the village green in Salem, Massachusetts, they were barely three months old, organized on December 13th, 1636, the date we now celebrate as the National Guard birthday.

The National Guard is older than the Army.

The National Guard is older than the Army. Militias were used as early as 1636 to protect British colonies. The U.S. Army wasn’t formed until the beginning of the Revolutionary War.

National Guard units were called Minutemen during the American Revolution due to their rapid response ability. This endears them to me in a special way as I was a graduate of Marshall High School here in Portland, Oregon. Our school mascot was the Minutemen (and Minutemaids for us females).

Marshall High School no longer is in operation, unlike the National Guard which has continued to play a vital role on domestic and foreign soil.

The term “national guard” was popularized by Marquis de Lafayette in 1824. Lafayette was a French military officer who fought in the Revolutionary War. He used the term to describe each state’s militia. It didn’t become an official term until 1916 long after Lafayette was gone.

The National Guard formed one of the first all African American units in U.S. military history, the 54th Massachusetts Volunteers. Their creation was met with mixed reactions, but the unit serves to this day and the first African American to receive a Medal of Honor, William Harvey Carney, hailed from it.

American Samoa is the only territory of the U.S. to not have a National Guard unit.

Military.com gives more information about the lesser-known facts of The National Guard. It is the second-largest militia force, second only to the US Army. National Guard troops have fought in every US war since 1936.

2MyHero does not carry National Guard specific cards, but there are Soldier and US Army cards that are suitable to send to encourage your National Guard Soldier!

However you choose to celebrate the day be sure to enter the December 30 giveaway for a chance to win a $50 Amazon gift card. All you (or they) have to do is submit a photo either on Instagram or Facebook of themselves with the 2MyHero military greeting card you send them. Be sure they tag @2myhero to be entered in the giveaway. You can read all the rules here.

There are also ways to enter without purchasing a card, so be sure to read all the rules.

Of course, there have been thousands of 2MyHero cards purchased and sent to special Airmen, Coasties, Marines, Sailors, and Soldiers. Anyone who has received a card is welcome to enter. Perhaps you received a card 5 years ago. If you’re still holding onto it (because it is so incredibly special to have that handwritten message from a loved one) then take a picture with it and a great big smile on your face and post it or email it.

By participating, you agree to give 2MyHero the right to use the photo and winner’s first name on our website and social media channels (Instagram and Facebook) without further compensation unless prohibited by law.

The giveaway is open to U.S. residents and U.S. military personnel with an APO address. Giveaway dates are September 30, October 30, November 30, and December 30, 2020.

A Picture is Worth a $50 Gift Card Giveaway is in no way endorsed, sponsored, or administered by Instagram, Facebook, or Amazon. The sponsor of the Giveaway is 2MyHero LLC.

Let me know how it made them feel and how it helped you stay connected with them. Of course, be mindful of OPSEC, and don’t give any specifics or details that would be potentially harmful to put out on the web

You can also find 2MyHero on Pinterest, Instagram or Facebook. I’d love to meet you in cyberland and learn more about what you need to help you stay connected with your military peeps.

Connect with us through our Contact Page to leave your feedback on the cards and/or your purchase experience. Your feedback is always welcome!

2MyHero is a registered trademark with the United States Patent and Trademark Office. www.uspto.gov